Roger Tudó (ETSAV 1999) is co-founder of the architectural office HARQUITECTES, an architecture studio established in 2000 and based in Sabadell, Barcelona. It is managed by four partner architects: David Lorente Ibáñez (Granollers, 1972), Josep Ricart Ulldemolins (Cerdanyola del Vallès, 1973), Xavier Ros Majó (Sabadell, 1972) and Roger Tudó Galí (Terrassa, 1973). All of them licensed between 1998 and 2000 in the E.T.S.A. Vallès, where Josep and Roger teaches Projects and Construction subjects. Xavier also teaches Projects in the E.T.S.A. Barcelona.

Their work has received some recognitions and awards –for built works and also in ideas competitions- and it has been published in many national and international media, been selected for several exhibitions and invited as lecturers in many events in Europe and America. 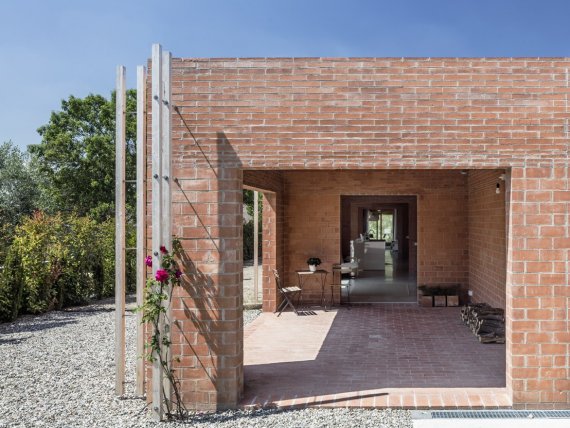 On a plot without salient features, the project took as starting point the restrictions marked by the geotechnical study, which showed that the first meters underground had a low resistance capacity. To avoid a deep foundation, not recommendable for both economic and environmental reasons, it was necessary to reanalyze the organization of the house and its building systems. The design called for a very light construction, or else one that would evenly distribute the loads to the ground. The light construction option was discarded because it was considered important to gain interior thermal inertia for a better passive behaviour.

The first decision was to build a house on ground level in order to distribute the weight of the building. The second, to use decking to convey the load of the pavements and use directly to the ground. The third, to use a linear structural system organized in a grid to fully and proportionally distribute loads of the roof to the ground. In sum: taking the project to the limit, adjusting to the maximum and overloading the terrain to an extreme to achieve the heaviest house possible with the màximum mass (inertia) the terrain could take.

The volume freed up below the deck was filled with a thick layer of gravel, creating a thermal collector with a high inertia that pretreats the air renewal of the house. In the design process, any problem was treated as an opportunity that could be taken as an advantage to improve the project. The program is distributed in ten equal spaces of 3.5 x 5.12 meters. The versatility of these 18 square meters and the generous relationships between them offers, surprisingly, great freedom and allows imagining that the house can be used in very different ways over the years, creating rooms that can be independent or used as a single space.

The architecture pursued was one that responds to the minimum and basic needs, avoiding superfluous elements, but that allows at the same time a maximum potential of uses. The house is just an infrastructure where the users can choose the best way to make it their own. The solar protection reproduces the interior grid with a vegetal protection organized like small chapels, creating a threshold that will prevent the summer sun from overheating the house, minimizing the visual impact of the construction, which will blend with the garden. House and garden would want to be one same thing, to live using the whole plot. 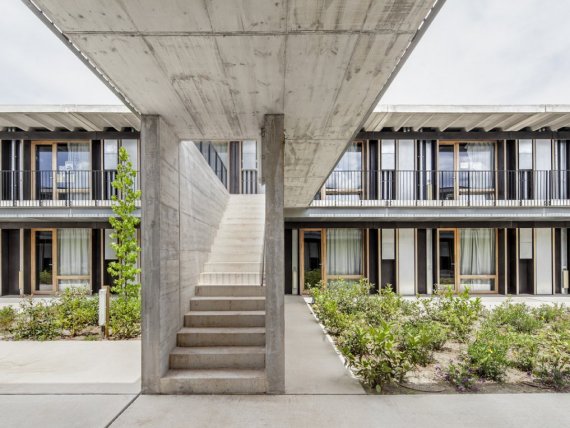 The new dwelling house for university students is located in the same block as the Vallès Architecture School. The project proposed intends to keep its balance among the existing buildings, outside areas and the new dwelling house, which is formed from two parallel to street blocks layed out over two floors and separated by a central atrium.

Since it is a dwelling house for architecture students, we have come up with a program that permits intense connections among the users both individual and group level, owing to the interior flexibility of the apartments and the potential use of the atrium as an event space.

The project banks on industrialized construction by using just one housing module type made of pre-formed concrete without partition walls. Each unit has just the necessary fixed elements, simplifying finishing and installations. Most of the components are installed and assembled by dry-build systems so every module and its finishing can be dismantled and reused or highly recyclable. The building is layered out over two floors in order to take advantage of the existing topography making accessible entrances without the need of using elevators and to reduce a 50 percent of square meters in corridors and stairs. The central atrium will be covered* in order to create an intermediate bioclimatic space that increases the energy efficiency of the building and, at the same time, economizes the building enclosure. 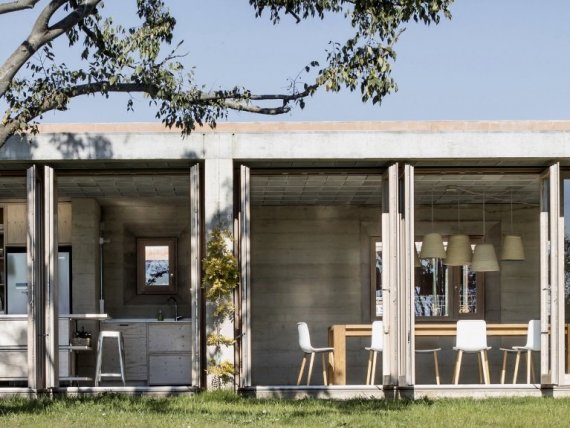 The stone wall that marked out the boundaries of the estate went around the whole site, revealing just the tops of the trees inside. The materiality and the irregularity of the geometry of the wall endowed it with a special character and presence, but the current regulations made it compulsory to extend the width of the street, so preserving the wall was impossible.

Without the existing wall, the first and main challenge the project had to face was that of re-contextualizing the plot, building a new house able to offer a coherent, deferent, and honest response to its surroundings. Instead of placing the house in the middle of the garden, the project proposes surrounding it: a house that functions as a fence.   A house-wall permits recovering the urban continuity and also experimenting with a new, very elongated type, everything in one level, adapted to the topography and to the new geometry of the street.

The house follows the material and constructive logics of the original wall-fence, but adapting them to current requirements. It is built entirely with load-bearing walls, reusing the stones from the old wall, mixing them with aggregate from the plot along with limestone and cement. And to this traditional mortar base small insulating particles of recycled expanded glass will be added. Instead of stacking, the wall will be coffered and lifted with a mixed technique between adobe and cyclopean wall. The outer layers facing the street will be chipped to let the stone resurface, while the interior will show the formwork finish.