WHAT IS TACTICAL URBANISM?

It is also called Emerging Urbanism and is defined as a strategy of action based on short-term intervention, through creative and low-cost ideas, at a local, punctual and controlled level. Its goal is to condition public space for those who live in it: the citizens.

This is the opposite of what we see in today's cities: streets designed for vehicles and blocks of apartments. Thanks to tactical urbanism, pedestrians and city dwellers gain ground over cars and reclaim public spaces for the well-being of the entire local community.

Do you want to know more about tactical urbanism? In this post we will deepen on this strategy that responds to the demands of city dwellers.

Tactical urbanism aims to generate awareness of what it really means to live in wellbeing and harmony in cities, and thanks to these small local changes, a new configuration of the urban environment is achieved, more in line with people's needs.

On many occasions, people protest against these tactical interventions as inappropriate, still fighting for the old ideas of more space for traffic and parking. Tactical urbanism breaks with modern city planning and makes it participatory. The goal is to get less surface area for parking, more space for residents and to seek for the regeneration of disused public spaces for community use.

This type of intervention model has gained popularity in the recent years because it has great advantages over conventional models of project implementation. We could list the characteristics of tactical urbanism as follows:

It is very similar to urban acupuncture, which also seeks to regenerate urban areas at the local level, with low investment and quick and easy implementation. Normally, tactical urbanism result from a popular initiative, while urban acupuncture is usually a consequence of public or top-down initiatives.

The pandemic has brought many changes at social and coexistence level in public spaces, and the configuration of cities is being adapted. While we manage to eradicate the pandemic in the short term, or we prepare urban environments for future threats, it is necessary to redesign and reorganize cities for the new social reality in which we find ourselves.

Tactical urbanism is an opportunity because of its quick implementation, to ensure distance between people, creating an urban space with less traffic and more outdoor activities.

Street reconverted into a space for neighbors (Logroño). Photo:© logronocallesabiertas.es

A nearby example of tactical urban planning is Logroño, which has reconverted streets into zones for neighbors, thinking about the new needs of people in this pandemic situation.

We can also see the application of tactical urbanism in New York's Domino Park, where circles were painted on the ground, where people could be placed, to ensure social distance.

Tactical urbanism represents original and creative ideas, sometimes transgressive ones, and it definitely encourages the participation of society in urban spaces, so it is important to pay attention to its implementation. The ideas must also be in line with a general urban policy and within a broader context, since their temporary nature and low durability may not solve the problem in the long term, and they can even make it worse, if it is not corretly implemented.

That is why these innovative ideas should be the first step towards building well thought out, attractive and high quality public spaces to provide the ideal conditions to ensure their use and durability. 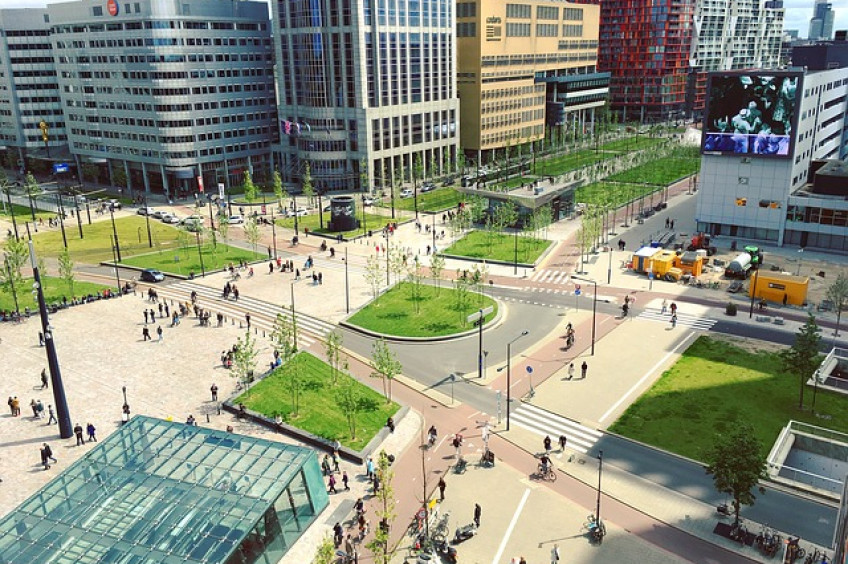