New York is one of the great cities of the United States famous for its numerous appearances on the big screen. But in addition, the city has a modern and contemporary architecture that rises to the heights through its many skyscrapers, as well as unique corners that are worth visiting if you go on architectural tourism to New York.

New York as a destination for architectural tourism

We cannot talk about architectural tourism in New York without talking about skyscrapers.

Skyscrapers are the main architectural protagonist in New York City, which boasts buildings of great architectural interest in a variety of styles spanning different historical and cultural periods.

New York City has three sets of buildings that are considered part of its Skyline: Downtown Brooklyn, Lower Manhattan and Midtown Manhattan.

However, the size of skyscrapers is something that is also regulated in New York City. The Zoning Laws of 1916 required buildings to be a specific size to allow sunlight to reach the streets below the skyscrapers.

Here are some of New York's most iconic buildings that worth a visit as architectural sightseeing in the city.

The 443-metre Empire State Building is the tallest building in New York City and New York State. Completed in 1931, located between Fifth Avenue and 34th Street, the 102-storey building is in the Art Deco style like the Chrysler Building, which we will discuss later. It also has an observatory where you can enjoy a beautiful view of Manhattan.

The 319-metre-high skyscraper is one of New York City's most iconic buildings, located in Manhattan, in the Art Deco style. The building, completed in 1930, has cube-shaped tower tops used on Chrysler automobiles, as well as eagle gargoyles at the four corners and a lobby of steel, granite and marble.

It is one of the tallest skyscrapers in New York, and is characterized by its Gothic style. It was designed by Cass Gilbert in 1913 and has 60 floors and a height of 241 metres. Its structure resembles a gothic church because it has beautiful decorations in the form of spires and gargoyles. Its roof and dome are covered with Byzantine-inspired gilded mosaics, and inside are ostentatious marble staircases.

The twin towers of the World Trade Center were the tallest buildings in the city from 1973 until they were destroyed in the attacks of 11 September 2001. The towers were 417 metres and 415 metres tall, respectively, and both were 110 stories high.

Citigroup Center is a 59-storey office tower considered one of the most important post-war skyscrapers built in New York. The striking pitched roof design, sleek aluminium-clad facade and canopied plinth above St. Peter's Evangelical Lutheran Church made the skyscraper a symbol of New York City architecture.

It is a modern skyscraper located in Midtown Manhattan and one of the most important examples of green skyscraper design in the United States. It features an environmentally friendly gas absorption chiller, combined with high-performance insulation and a solar shading curtain wall, ensuring that the building does not require heating or cooling for most of the year. As the first large-scale project in construction to take on these features, the building has received awards from the American Institute of Architects as well as the AIA State of New York. 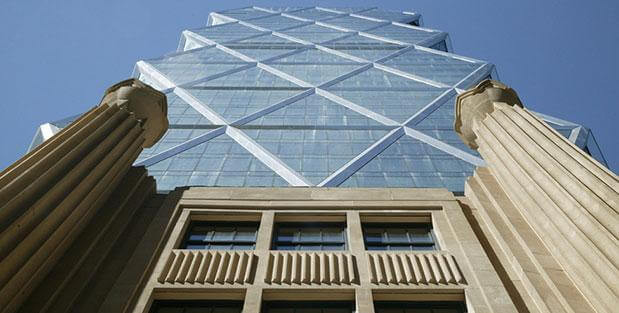 Hearst Tower, is located in midtown Manhattan is another example of a new generation of ecologically designed skyscrapers in New York City. The Hearst Tower is a glass and steel skyscraper that sits atop the original Hearst Company building. It is easily recognizable by its impressive interlocking triangular glass panels designed by architect Norman Foster. Hearst Tower is also the first skyscraper in New York City to receive LEED Gold certification from the Green Building Council.