Sacha Menz, born 25 May 1963 in Vienna, has been Full Professor for Architecture and the Building Process at ETH-Zurich since October 2004.

Since 1997: Co-Founder of sam architects and partners Inc. in Zurich. Several architectural competitions and built projects in Switzerland and abroad.

Since 2001: Member of numerous architectural juries, member of the Architectural Board of Consultants for the city of Ostfildern, Germany and member of several foundations in Switzerland.

2002: Member of the Board, from 2005-2011 President of the SIA (Swiss Engineers and Architects Association), Section-Zurich.

Since 2004: Member of the FSA (Federation of Swiss Architects).

2008-2011: Member of the Board «Platform Future Buildings», a Research Platform for Sustainable Building Technologies.

2009-2017: Head of the newly established Institute of Technology in Architecture (ITA) ETH-Zurich.

2014-2015: Deputy Director of the NCCR (National Centre of Competence in Research) in Digital Fabrication.

Since 2015: Co-Principal Investigator at Scenario 1 (Dense Building Typologies) at the Future-Cities-Lab in Singapore.

2015: Publication of «Public Space Evolution in High-Density Living in Singapore».

2015-2018: Member of the Board of Directors of SIA (Swiss Engineers and Architects Association).

Since 2017: Member of Reviewing Board for Clusters of Excellence, DGF (German Research Foundation).

Since 2018: Member of the Strategy Commission of ETH-Zurich.

Since 2019: Executive Board Future-Cities-Lab GLOBAL

The building by Werner Stücheli from the seventies will be partly returned to its basic spatial features, partly condensed, structurally supplemented and extended. The super-urban, horizontally structured block thus complements a piece of the city on Tessiner Platz. The museum uses will be integrated into the base and the basements, the spatial joint on the second floor will open up the terrace and will be open to the public again through the restaurant, shop and seminar areas. The next floors are divided into residential and office areas. A two-storey construction with residential uses follows as a conclusion.

The conversion of Werner Stücheli's "Haus zur Enge" from the 1970s partially restores the original spatial character, while also consolidating, expanding, and adding on stories. The ultra-urban, horizontally structured architecture enhances Tessiner Platz, and therewith, a small stretch of the city. The FIFA museum facilities are integrated into the lower and basement levels. The terrace is accessed via the interstice on the third level, reopening this area to the public in the form of restaurants, shops, and seminar rooms. Above are four levels designated for residential and office spaces, followed by a two-story, rooftop residential unit. 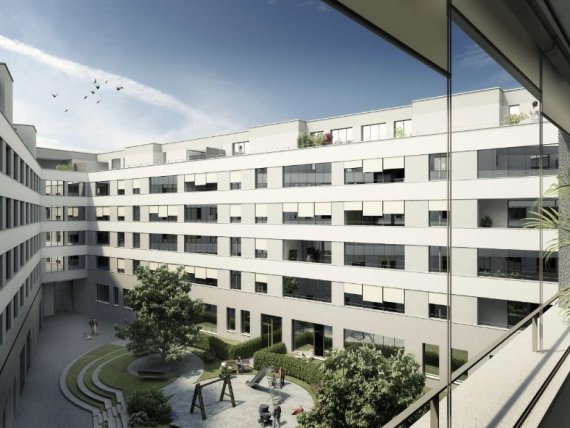 Vittorio Magnago Lampugnani has created a new urban quarter in the tradition of the city of the nineteenth century. Within this system stands construction site III, which is organized around a municipal courtyard. The head of the triangular, mixed-use building is condensed around an inner hall, which provides access to the multi-horse end. Rough as well as fine, geometrically structured types of plaster nobilitate the simplicity of the outer form.

Vittorio Lampugnani's novel take on an urban district draws on the cities of the 19th century. Laid out as a city block around an urban courtyard, Site III is primarily configured into two apartments per floor, accessed street-side from a stairwell. The front-to-back floor plan enables both a courtyard and street view. Only the apartments at the apex of the building complex are accessed via a central multi-story atrium entered from the courtyard. On the exterior, alternating rough and smooth geometric plasterwork enhances the straightforward facade. The mesh-like appearance of the rough plaster surfaces as well as the window details evoke the wire mesh fences of earlier community gardens, while the natural stone border ennobles the stark character and form of the building structure. 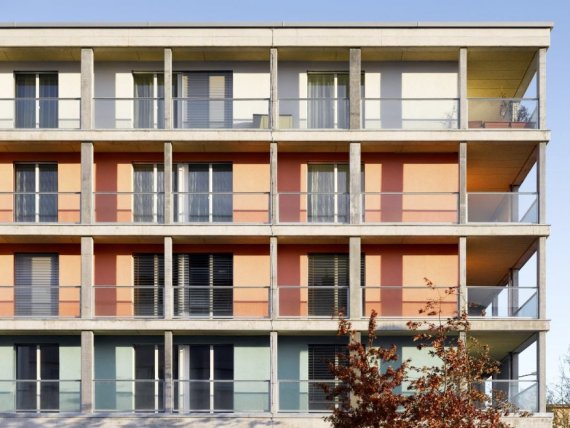 The triangular property, the consistent allocation of shops in the ground floor and service rooms on the first floor with residential floors above and the orientation of the buildings towards the view lead to a spatially complex overall complex, which in its urban appearance permits a possible interpretation of the city.

The triangular site, scenic orientation as well as the clear division of uses - retail spaces on the ground level, service rooms on the second level, followed by residential spaces - work together to create a multifaceted mixed-use center with strong urban character. 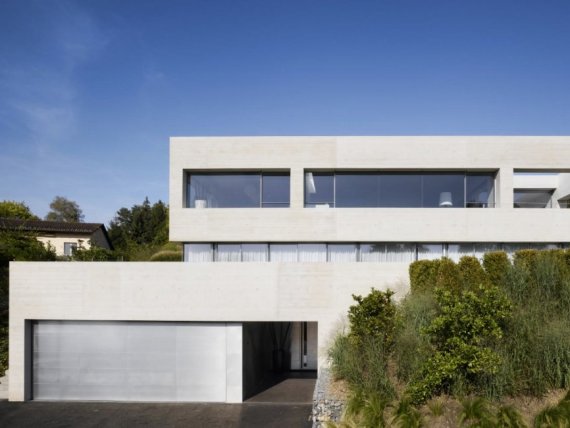 In the so-called noble periphery of Zurich, the new building replaces an existing master builder's house. The heavy living space, cast in sand-coloured concrete, floats above the transparently designed bedrooms, which merge permeably with the surrounding landscape. The usual typology of living on the ground floor and sleeping on the upper floor is thus turned upside down and redesigned.

The new construction replaces a master builder's house situated along Zurich's gold coast. The design concept reverses the customary residential arrangement of bedrooms above/living room below. The elevated living area, encased in heavy, sand-colored pre-cast concrete, hovers above the underlying bedrooms that blend with the surrounding landscape in their transparency.