This residential building located in Calpe (Alicante, Spain), is considered a jewel of modern architecture. La Muralla Roja by Ricardo Bofill Levi, is inspired by Arab and Mediterranean culture, with a spectacular play of geometry and color.

In today's post we present the most outstanding details of this marvelous work, an icon of modern architecture and its creator, the Spanish architect Ricardo Bofill Levi.

Architecture of The Red Wall by Ricardo Bofill Levi

La Muralla Roja is located in La Manzanera, an urbanization in the seaside town of Calpe. Although the works were finished in 1973, the truth is that according to the architect Ricardo Bofill himself, its special design began ten years earlier. The project began in the 1960s, specifically in 1968.

Its architecture is based mainly on geometry, which it uses to create different levels that are grouped in different staggered volumes, and geometric shapes connected through corridors, stairs and bridges. In this way, interesting plays of light and shadow are created under the Mediterranean sun.

The architect Ricardo Bofill Levi was inspired by Arab architecture, specifically in the tradition of Arab cities or kasbah, in which large walls closed to the street, delimit buildings turned towards the interior spaces. That is why the configuration of the building is composed of courtyards that communicate with each other. From these courtyards there is access to each dwelling and on the roof of the building there are solarium terraces, a swimming pool and a sauna.

In terms of its organization, the plan of the building evokes the Greek cross, forming several towers of different heights and creating courtyards at the intersections. This apparently labyrinthine scheme is a clear reference to popular Mediterranean and Arab architecture, in which the volumes are broken up to create shaded spaces, protected from the heat outside.

In addition, its emphatic geometry refers to the constructivist aesthetics of the early twentieth century.

In its relationship with its surroundings, the imposing volume of The Red Wall, located on the edge of a cliff, highlights the beauty of the place and stands out like a fortress in the profile of the coast. The chromatic range used for the entire building also contributes to this contrast by giving the space a magical aura: reds, pinks, purples and violets stand out against the characteristic blues and greens of the natural landscape of the Mediterranean coast. This striking use of color is another of the main characteristics of the building, but again it is not random, but corresponds to a design criterion, as each color serves to differentiate the different parts of the building. 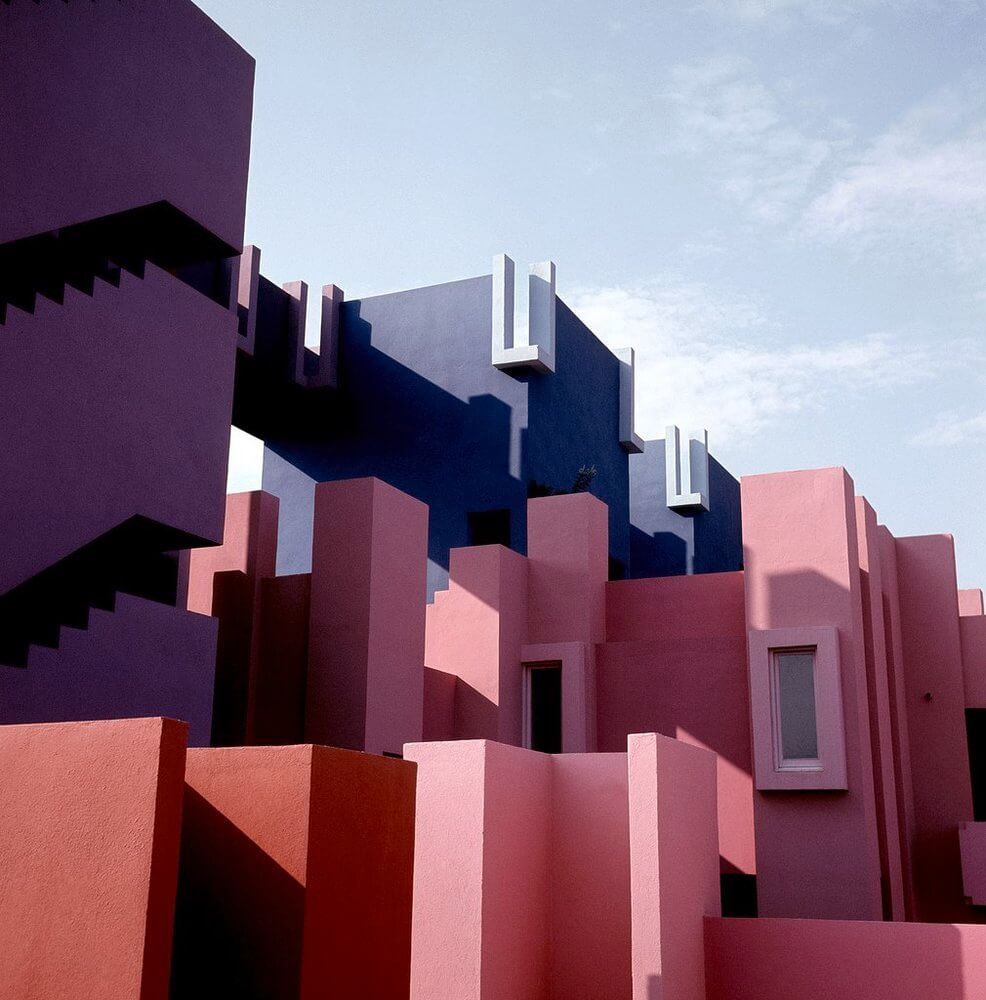 It is considered an icon of modern architecture because Ricardo Bofill Levi's Muralla Roja combines two architectural traditions deeply rooted in Spain, especially in the southern part of the peninsula: Arabic and Mediterranean.

Its cross shape with volumes at different heights, makes the interior a labyrinth of stairs, patios and bridges. There are 50 apartments that Ricardo Bofill Levi's Muralla Roja hides inside (studios of 60m2, 2-bedroom apartments of 80m2 and 3-bedroom apartments of 120m2). The labyrinthine paths are another of the elements that characterize this building, and they are again a reference to Arab architecture, which seeks to protect the interior spaces from the intense Mediterranean sun and the strong wind from the coast.

In the 1960s, Ricardo Bofill Levi founded the architectural firm that has his name: Ricardo Bofill Taller de Arquitectura (RBTA). Internationally recognized, it is a studio specializing in urban design, interior design, architecture and park and garden design.

Ricardi Bofill Levi is living in Paris, although he spends long periods of time in Spain. International fame came to him for his characteristic postmodernist style in the 80s and 90s, which is characterized by incorporating classical elements in his creations.

He holds an Honorary Doctorate from the University of Metz (France) and is also a member of the jury of the prestigious International Prize of Catalonia.

The Red Wall is not the only work he is known for. His designs for the Gaudí neighborhood and the W Hotel in Barcelona are well known and representative of his career. Walden 7 is another of his best known projects, from the same period as La Muralla Roja in Calpe.